I’m trying to start a DAO which would promote and curate ANSi art using a bulletin board system built on blockchain. I’ve built a proof-of-concept for the board. Next is for an organization to collectively curate ANSi art that will live on the blockchain. I’m looking for folks who just want to discuss the idea, help build a community, curate art, connect with or be artists…

Like anyone here, this is about love for the art/scene not money. But the idea has a self-funding mechanism. And is self-governing. 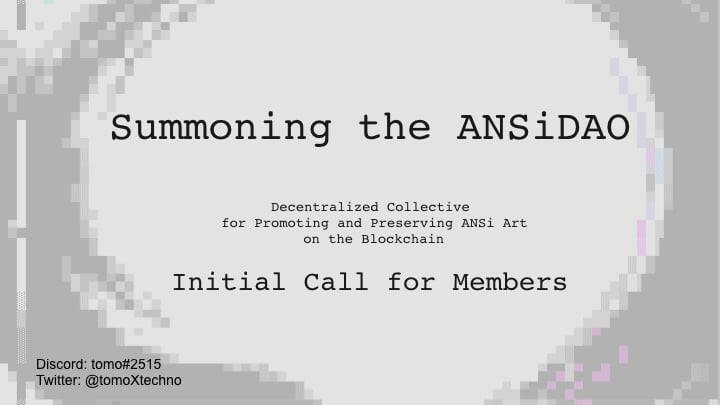 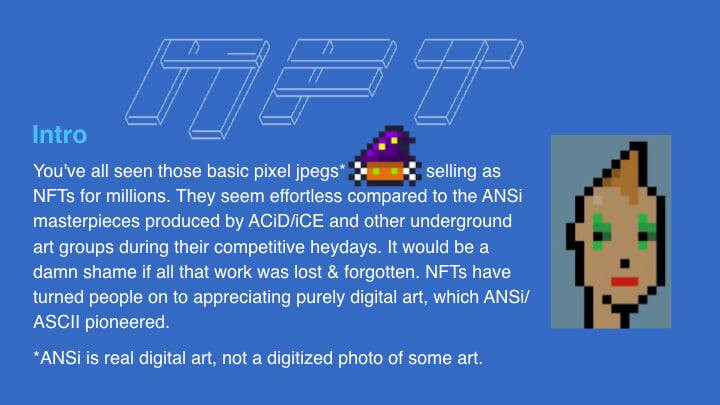 Imho - lets stay underground and keep commercialism outside the scene. I don’t fancy the idea that you want to profit on other people’s art like this.

I don’t have any intention or expectation of profiting. I planned to donate my own time and money to organize it. Absolutely nobody should join thinking they’re going to make money. You will not.

I do want to help artists sell artwork. I am absolutely for artists being able to do this and I do not stand by attempts to call them out or call them sellouts. The scene is much closer to dying and disappearing completely than becoming mainstream. I don’t think you need to put effort into keeping it further underground.

That sounds interesting enough to me. I sent you a PM about it.

I actually sought this out. Interesting that you’re mulling over this concept at this very juncture in time.

About eleven or twelve years ago someone on DALnet offered to send me a new crypto currency over IRC, basically worthless, but just to play around with a little bit as a technologist.

I accepted, and we sent small portions of the token back and forth amongst ourselves and others, and among other things, it was pretty kewl - not a completely new concept, as there had been a couple of earlier types of these tokenized instruments.

At that time, the world was still recovering from the grips of the so-called credit default swap mortgage implosion crisis, which coincided with gasoline prices going from about $1.36/gal to well over $3/gal in just a couple of months (at least in California). If that wasn’t going to push millions over the edge into the oblivion of foreclosure nothing would.

There was a lot of speculation about what is sometimes today referred to as a DeFi concept, and the world was ready to examine just such an ecosystem.

We’re weren’t concerned however, with any of that nonsense. We were just deriving enjoyment from making machines work really hard at solving frivolously difficult problems - just for shits and giggles.

It was novel and it was kewl, but it had no real use cases at the time from my perspective, and there were other, more clearly exciting technologies to pursue at the time.

I packed away the key pair among my other computer museum’s software licenses and such after divesting myself of a few of the ten tokens I was given and relegated it to the, ‘Maybe later’ part of my brain.

Then a use case came along. Mostly things like drugs and pr0n and stolen credit card numbers being transacted at an Internet bazaar called, ‘Silk Road’, so given the negative associative connotations, what once might have been a tinkering project to be revisited now became something pretty much completely disregarded as useless technology, and almost forgotten.

I still have those same 6+ Bitcoins. On a paper key.

I’m definitely not an investment speculator, or even a serious investor per se’, but in recent years I have embraced the utility of commerce in what I personally consider to be viable cryptocurrency assets: XLM, XRP, and ZEC, are my particular favorites for engaging in monetary transactions accepting payment for services from many of my customers. They are fast, and the cost of transactions are dirt cheap (typically fractions of a cent), much cheaper than any credit card merchant gateway.

In the past year I’ve also warmed a bit to Tron, which is increasingly used for the transaction of goods and services, especially in the gaming community.

Lately, quite recently actually, I’ve started investigating and researching just what all the interest is that the investment community has in crypto, which started leading me to examine other blockchains as well. Most recently, I’ve experimented a bit with Solana SOL), which is inexorably tied to the NFT art world interests, and there is indeed a fair amount of speculation in that market strictly for the sake of speculation (which makes little sense to me, but that is beside the point).

So as I’m examining some of those arenas, I can’t help but stumble onto a genre of NFT artwork so close in resemblance to imagery; so closely resembling the characters, the heroes, the villains, that permeated so many of the door games I used to run on my BBSes, that the next logical thought I had was…

What about the gamification of BBS ANSI art in the form of NFTs on one of the major blockchains that facilitates this sort of thing?

Anyway, here’s a good example of what you’re referring to when you compare contemporary methods with what we did with TheDraw, and what is typically done with something like Pablo Draw now:

The site was just launched about an hour ago. I had access well in advance.

Now, I know you’re not suggesting that ANSI art be treated in a matter akin to baseball cards as many of the emerging NFT collections are; and were we to compare what’s happening now toward that end it certainly might become apparent that creations from crews like aCiD!aSCII, DeZign, G-Style, and Wetworks are the true, coveted rookie cards; yet I think this notion of expected monetary valuation is a precocious, self-serving degradation of the true possibilities and potential that the blockchain has to offer the community.

I like the idea you have floated here. I find merit in the concept, without consideration given to monetary value, although there certainly is some nominal attribution of funding required to facilitate this vehicle - exchanges, transactions on the blockchain - Generally speaking, the operational energy that such mechanics require in terms of electricity and MIPS/MegaFlops. It doesn’t need to be obscene or even exorbitant amounts.

Just this evening, I tested the Solana blockchain for the first time. Including the installation of a browser plug-in hot wallet, connection to Solsea, and setting up a free trading account (with free debit card) on an exchange where SOL (The irony of the pun is not lost on me) is listed.

To perform a proof of concept experiment I sent about 80 cents of Tron (TRX) from my Atomic hot wallet to my account on the exchange at a cost of about 2 cents in US Dollars (taking about three minutes to settle) , converted that TRX to SOL instantaneously (zero dollars), and then sent about 60 cents worth of the SOL to my freshly installed browser plug-in Phantom Wallet that has native Solana blockchain support for Solsea. That final step cost me a whopping 2 cents and took a whole three seconds or so to be settled.

There’s no reason that ANSI/ASCII art can’t be assigned a valuation of a penny, or fraction thereof. All of this, with added optional smart contact features such as copyright and licensing assignment. Many NFTs are gamified too, which, in the case of superheroes, spaceships, or arch enemies in BBS games can be an extra bonus.

So, it’s not about monetary value, or at least it doesn’t need to be at all, as just proven to myself though those proof of concept transactions earlier this evening.

There are a lot of possibilities which can serve to bring fresh interest in BBS gaming as well, and that’s a good thing for pretty much all of us SysOps, not just the ones who will initially directly benefit by virtue of running systems that are primarily geared towards gaming, and it can certainly incentivize a fresh pool of artistic talent to participate in, popularize, and enjoy the world of ANSI and ASCII art, screen design, general BBSing, etc.

Everything, all of it, the entire network, blockchain, exchanges, everything. It’s all, already in place and ready to be plugged into.

And there will always be the curmudgeonly too. Hey, it’s FidoNet after all, right? What would be the fun for Yogi without Booboo?

Happy to chat about different uses of crypto in a more appropriate forum! And that goes for anybody who’s curious in this topic! I got a dm from someone else but didn’t get yours. I’ll send you one.

Re: monetary value of ANSI/ASCII art - yup, it could be $0, or $0.05, or $5 million - but not for me to decide! It’s interesting to me if there were a market which could place a value on the art though. But for that you need a base/platform and that’s what I’m talking about building as the first step.